The day started rather unpromisingly as compared to the last few mornings with rain showers and blustery conditions.  However, with one observer staying on until next week and others arriving their perseverance paid off when at mid morning a male Blackcap and the first Song Thrush of the autumn were caught. 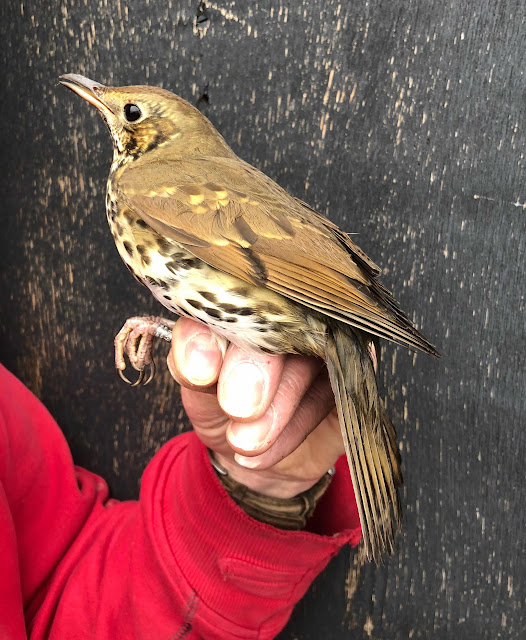 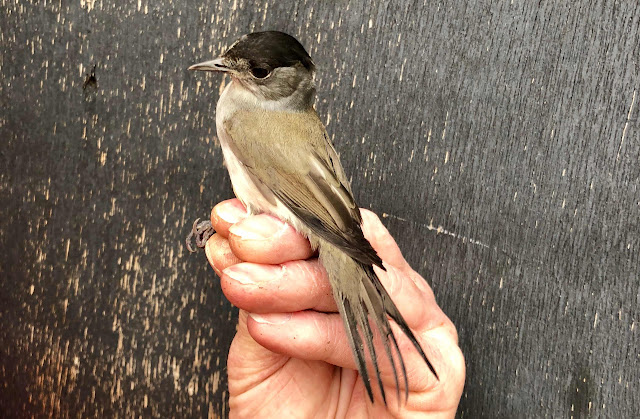 Three Wigeon appeared on the flooding tide in the gutter.
A pale, possibly leucistic, Knot was found on the other side of the gutter with normal Knot.  It is interesting to speculate whether or not this bird is the returning bird from earlier this year.  Without ringing, of course, we will never know.

A seawatch was surprisingly productive given the wind direction (although the strength was clearly helpful) with at least 2,500 Common Scoter, 7 Red-throated Diver 25 Great-crested Grebe and a surprise Great Skua which flew east to west passed the North end then turned and went back east but further out.
After the tide 58 Grey Plover were east of Little Eye and on the East Hoyle were 295 Sanderling, 45 Dunlin and 115 Curlew, 150 Knot were about the islands.
A Peregrine flew north  below the Obs garden as the tide ebbed.
Later in the day a female Blackcap was caught and ringed.
Ringing: Blackcap (2), Song Thrush        [ 530-34 ]
photos AS,CJW
Posted by Hilbre Steve at 22:19