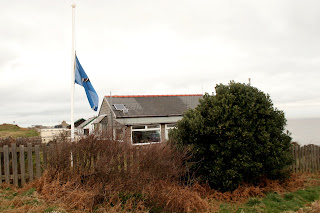 A number of members gathered on Hilbre this morning to honour the memory of Peter - he will be sorely missed by all. The flag remains at half mast.

Three Magpies attracted attention by flying around the island from early morning, but one was seen later off to the west to be

swimming in the Dee with Gulls! A tricky identification problem caused by a bird in distress. Twenty two Red-breasted Mergansers were off the West Hoyle with 18 Great Crested Grebes but no sign of any Little Gulls.


Lots of Meadow Pipits singing on territory now, 4 drake Mallards have taken up residence on the main pond and a flock of 6 Linnets went over which may not have been resident birds, and the only other migrants were 9 Pied and a single Grey Wagtail passing over.