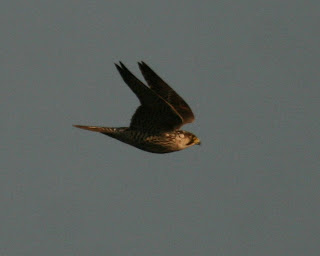 A strong south-easterly chilled observers from early morning, and despite a Grey Wagtail down on the east side of middle it soon became apparent that migration was not as strong as yesterday. Twelve Gannets were showing in the first hour but very little else was on the sea except for 3 Common Scoter, and even the Gannets disappeared later.
The Merlin from yesterday(right) flew east over the island and almost immediately another went down the west side proving there were two individuals present.
Meadow Pipits were in good numbers (no Tree Pipits today !) but finches were well down with only 12 in total including 3 Siskins. Only 2 Pied Wagtails today, but a single White was welcome. Goldcrests were also scarce with 6 noted and a single Chiffchaff, most of which seem to have stayed from yesterday. 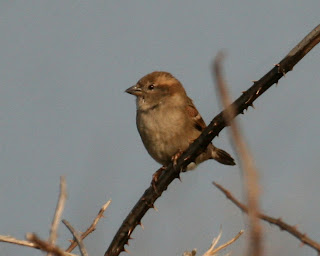 Five House sparrows (left) came down on the bushes but did not stay too long while 2 Starlings did not even alight at all nor did a Wood Pigeon (below) that flew south passed the light (not a bird we would bother to photograph on the mainland !). The resident Mallards have increased to 9 drakes inhabiting the main island pond. 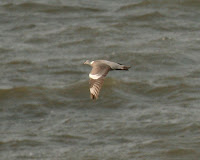 Two Wheatears (below right) were eventually found that either arrived late in the morning as Wheatears tend to do on Hilbre or had been hiding from the blustery wind. 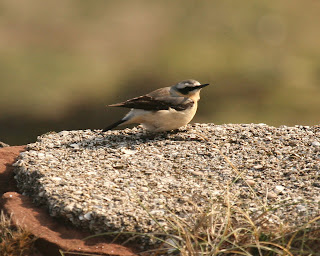 Could any micrologist identify this fungus (above) found today on a Hilbre log pile? [click to enlarge] 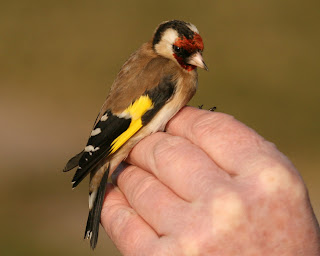 Trapped for ringing :- a Meadow Pipit and a Goldfinch (right).
(DB,CJ,PGR,CJW,SRW,PSW) photos CJ
Posted by Colin at 12:42