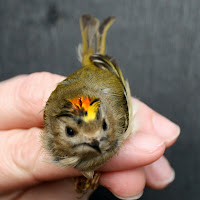 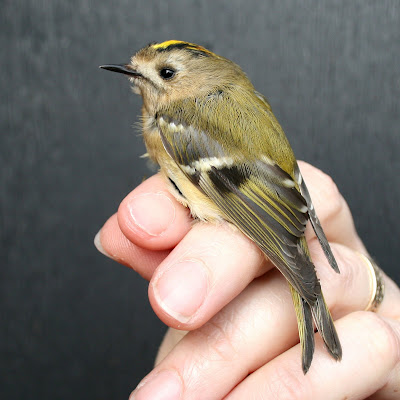 A much less breezy day with some sunshine helped enhance the feeling of spring, especially when the first Sand Martin of the spring was seen flying north west across the island and 2 Goldcrests which were also the first of the year appeared around the gardens. One one the Goldcrests was trapped and showed the orange crown of a male.
A male Eider (below right) was seen going west passed the north end and a Sparrowhawk soared high over the tide edge. 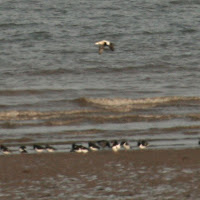 Still only a few other passerines, including a single Blackbird grounded, with 3 Pied Wagtails, 3 Goldfinches and 2 Greenfinches passing over.
Six more Little Gulls were identified towards the wind farm.
(DB,CJ,CJW,SRW,+TGW,RW,DW) photos CJ
Posted by Colin at 14:07