A very brisk south-easterly and mist greeted observers and it was rather quiet first thing. However, soon after the first of several flocks of Starlings was seen passing over the shore between Little Eye and West Kirby with the final count of 1,860 for the day. 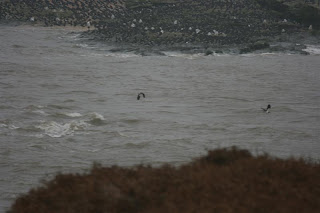 Four Wigeon were in the gutter on the rising tide and it was a good day for wildfowl with a single Teal seen later, 3 Red-breasted Mergansers but the highlight was a flock of six Shoveler (above left)which flew between the islands; not to mention the Brent Geese flock which was a little more scattered than yesterday making an accurate count difficult (146 yesterday). 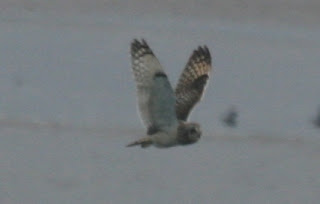 Also following the same flight-line as the Shovelers were two Lapwing (above right).

Migrants were struggling through against the strengthening wind with 3 Redwings passing over (including one on Middle), 3 Skylark, 4 Chaffinch as well as at least 8 grounded Blackbirds (of which four new birds were ringed). 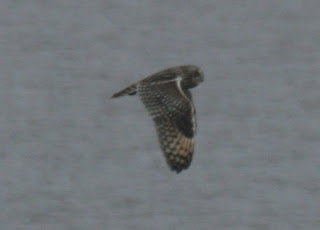 The colour-ringed Little Egret and one of the colour-ringed Pale-bellied Brent were both present and a single Short-eared Owl was flushed from the bracken near the Old Obs garden and was later seen down the West side (probably the same bird that has been seen on the island on several dates recently - photographed on 4th November 2011).