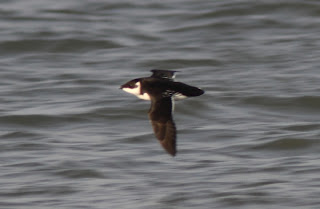 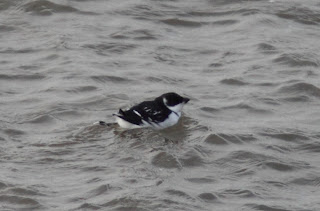 Strong south easterly winds gusting to force 5 -6 met the single observer on the island at first light. A few birds were grounded with a female Greenfinch (below right )and male Chaffinch (bottom right) caught in the Newton. At least two more Chaffinches (below right) were present but weren't caught. A Merlin chased one Chaffinch around the old lifeboat station and it ended up seeking refuge up the chimney whilst a Peregrine terrorised the waders. Rock Pipits were seen at both the north and south end and there was a small passage of Starlings overhead with a single Skylark also being logged. 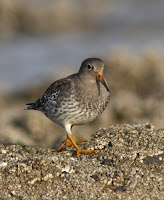 A group of Salford University students led by Scott Reid came over around 10.15 and had a talk by an Obs member and a tour of the Observatory. Although there wasn't much to show them in the way of ringing there were plenty of birds to be seen with the Brent's showing well off the north end and at least 5 Purple Sandpipers (left) being logged. The now regular Short-eared Owl was flushed from long grass just north of the Old Obs garden and flew out to sea being pursued by gulls before heading back towards the mainland.

One of the recently ringed Blackbirds was found predated by a Merlin at the north end but the regular pair were both accounted for. A brief sea-watch resulted in a a few Guillemots and a Red-throated Diver but whilst the Obs member present was having a well earned cup of tea he received a phone call from Scott that had him dashing north! Scott had seen a Little Auk in flight past the north end ( four photos top) but lost it as it headed down the west side. After a frantic search it was relocated but unfortunately flew before it could be twitched from the mainland.
(PSW,SRW) [1022-47] photos PSW( little Auk bottom left and others) & Scott Reid (other Little Auk photos)
Posted by Colin at 20:41