An afternoon visit by relatives of founder member John Gittins, led by John's brother Chris and organised by his nephew Tim, would have made John proud as the blustery south westerly wind and intermittent rain didn't put anyone off. John being renowned for walking out every Sunday morning with big rucksack on his back in all weathers!
﻿﻿﻿﻿﻿﻿
﻿﻿﻿﻿﻿﻿

A look around the Obs reminded everyone how much of an influence 'JCG' had on Hilbre Bird Observatory and it's members and he still does.
A Wheatear greeted the visitors on the Obs gate but a look around the traps and particularly the 'heli' (the first trap built on Hilbre by John in 1957) produced an unringed Robin - one of John's favourite birds.
Earlier the wind had decreased since yesterday and a 2 hour sea watch was uneventful, the chief sightings were a Red-throated Diver, 15 Common Scoters, 2 Red-breasted Merganers and 3 Great Crested Grebes.
Two Swallows were seen but there were no migrants on the ground. The normal waders were on the shore including the now regular flock of about 300 Knot, and 19 Brent on the tide edge with the Oystercatchers  (below, photo JE). 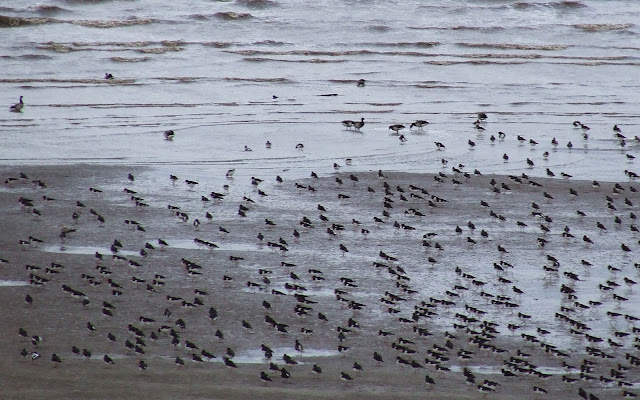