A pleasant morning with a south easterly breeze was much more comfortable for observers but did not produce any birds in the first few hours. At 10.30hrs things improved when a male Redstart was seen to arrive from the sea on the west side, but despite an extensive search it could not be relocated on the island. Nearly an hour later a male Cuckoo flew in at the south end, crossed the ridge and disappeared down the west side. This explained the raptor like bird seen moments earlier distantly flying over Middle island, and the faint Cuckoo song that had one member thinking he was hearing things. Another thorough examining of every part of the island could not turn up the bird for photographs or ringing. The Cuckoo is nowadays becoming quite a rare bird on Wirral and especially at Hilbre where the last recorded was a juvenile in the middle 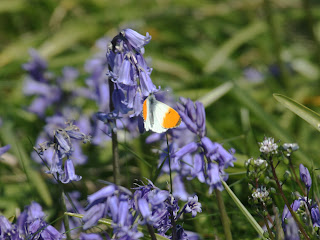 of July 2003, and before that another juvenile in September 1998.
The only other birds of note today were the first Little Tern seen this year (despite there being over 100 at Gronant) that was seen flying in the direction of the west hoyle bank and a single Flava Wagtail heard calling over the West side.
As the day warmed butterflies flew such as Green Veined White, Common Blue, Orange Tip (right), Peacock and the first Painted Lady of the year. No birds were ringed.
(DB,CJ,KMc,MGT+1,+SH) photo CJ
Posted by Colin at 13:17