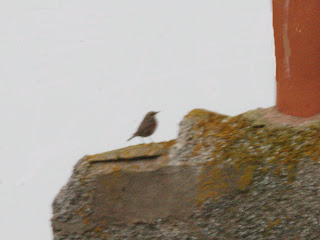 This morning was much more overcast than yesterday with light rain around dawn and the Swallows were passing first thing but were less visible as the cloud lifted and the sun shone through. In total there were 170 with just 2 House Martins and 4 Swifts to add variety. Seven Wheatears were on the ground for the first time for some days giving hope that some migrants may be hiding in the undergrowth but for the third day running no birds were available to be ringed. 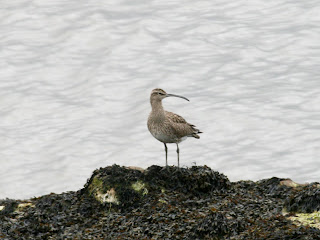 Highlight of the day was a brief sighting of a Redwing on the roof of the buoymaster's house (record shot above) which then flew high off the islands to the south. Redwings are not 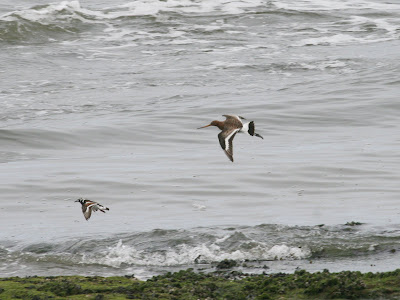 strangers to Hilbre but never before has one been noted as late as this, the previous latest appears to be a record of 5 on 29th April 1989; goodness knows where it came from/is going to. It is interesting to note there was also a Redwing on St Martin's (Isles of Scilly) today (although there was also a Golden Oriole there!).
In the early afternoon a summer plumaged Black-tailed Godwit (right with Turnstone) was at the north end with 3 Whimbrel (above) and 7 Turnstones which were also in full breeding dress. A few other wading birds are staying local at the moment including 57 Oystercatcher, 50 Dunlin and 4 Sanderling.
(DB,JE,CJ,KMc,PSW) photos CJ
Posted by Colin at 15:24