Weather: light air, mist around the estuary then thick fog before sun breaking through mid-morning
On arrival at the island a bank of thick fog rolled in from the sea, visibility 50yards, and failed to clear until the sun broke through 3 hours later at 09.00. The fog may have done us some favours as during this early period a few phylloscopus were on the ground (one a long winged (73mm) 'northern' type Willow Warbler, below) and a single Goldcrest. 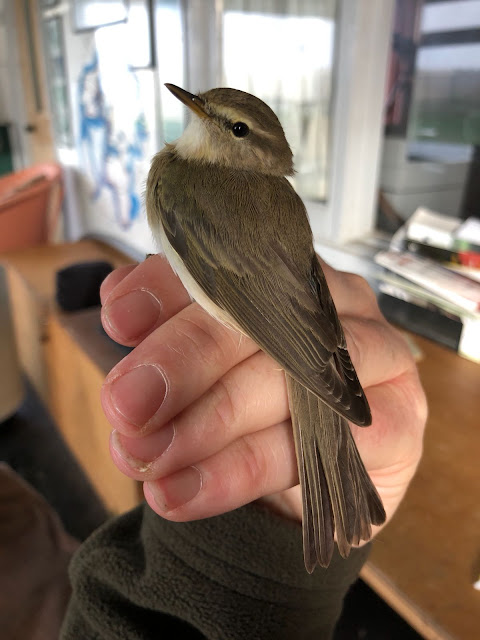 and together with the now expected Blackcaps, a fine male Whinchat, the first of the year for us. 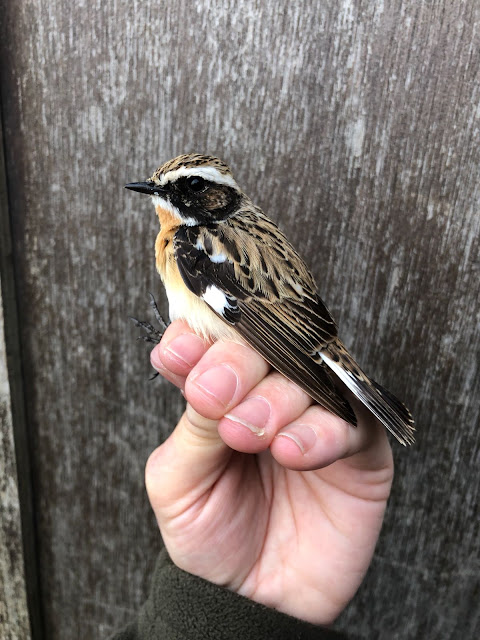 A Song Thrush suddenly appeared in the obs garden and minutes later a Redwing was also in the garden, quite a late record here and it became the first ringed this year. 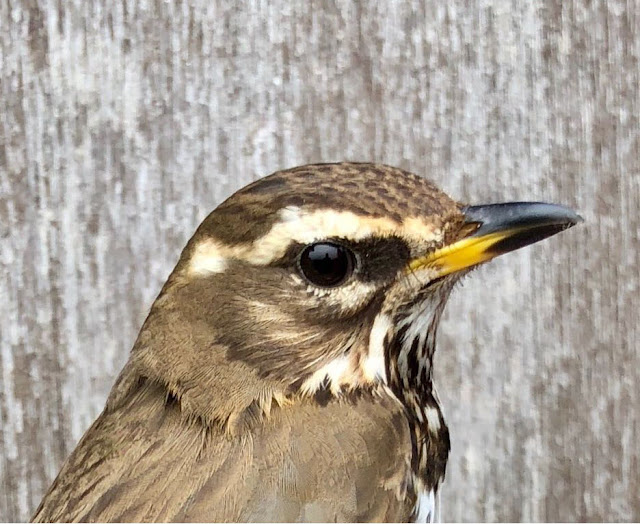 A Common Sandpiper was found on the shore off the south west corner, but became elusive when photos were attempted. A single Tree Pipit called overhead and a female Sparrowhawk flew low to the west over the south end. No Porpoises today but lots more terns with 45 Sandwich and 86 Common and 18 Red-breasted Mergansers were noted near the west hoyle as the tide started to flood.
Wheatears increased as the sun came out and 9 were on the islands this morning, including the one that was ringed yesterday. There were no martins and just 7 Swallows noted. Meadow Pipits seemed not to be moving today and only 8 Goldfinches, 8 White Wagtails, 3 Lesser Redpoll and a single Skylark passed through.
About 300 Dunlin gathered on the east side as the tide approached with a few Ringed Plover. Only 5 Whimbrel were seen, also 1 Little Egret.
Ringed: 3 Willow Warblers, 2 Chiffchaffs, 1 Blackcap, 1 Whinchat, 1 Redwing, 2 Wrens, 2 Linnets.
[ 228-21 ]
Posted by Colin Jones at 14:48