As daylight arrived it was damp and dreary with very little moving to excite observers but slowly things began to improve with a movement of Meadow Pipits (250 or so during a steady passage this morning) and a few Goldcrests and Chiffchaffs on the ground and 2 or 3 Wheatears present. Early spring regulars made an appearance including Woodpigeon (a single and a group of 20 over the shore), also a Canada Goose and all 4 'black' crows, including a Jackdaw over and another alighting at the north end, a Rook over Middle and a Raven landing at the south end and then Middle to the annoyance of the local Carrion Crows. 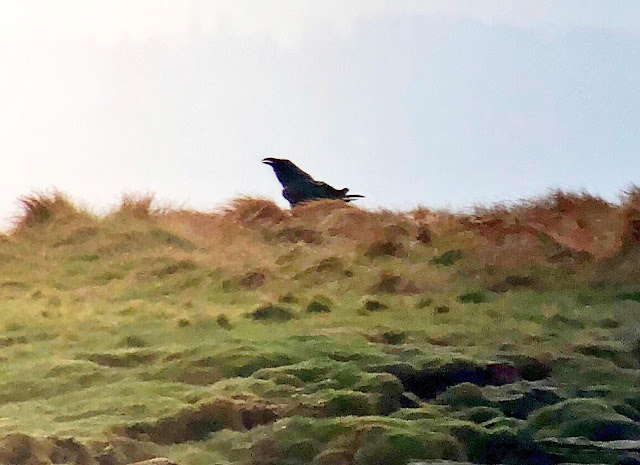 A Starling flew over, also 2 Sand Martins were logged flying by off the east side towards Wirral, the first of the year to be seen at Hilbre. Mid-morning a small fall was recognised by the arrival of more Goldcrests (now totalling 12), Chiffchaffs (now 5), Wheatears (now 7), 2 Reed Buntings, a Chaffinch, a Siskin and with them a male Blackcap in the obs garden, another first of the year. A Tree Pipit calling over the island became the 3rd new bird of the year.

Three Blackbirds that were around the paddocks and gardens were mostly elusive this morning.
Best of the waders visible at low tide were 83 Bar-tailed Godwits, while only 2 Eiders were noted this morning, a female and an immature which stayed apart from each other.
On the afternoon tide a Sandwich Tern and 2 Harbour Porpoises were recorded.
Ringing: 5 Goldcrest, 2 Chiffchaff, 3 Linnet, 1 Meadow Pipit, 1 Robin, 1 Dunnock.  [73-12]
photo SRW
Posted by Colin Jones at 17:42