Last September (2017) a number of the regular Hilbre ringers joined a team from the SCAN Ringing Group and South West Lancs Ringing Group at Altar training camp near Formby to try and catch and colour flag a number of Knot that were using the beach below the rifle range to roost at high tide.  A lot of behind the scenes work went on to get permission off the MOD to access the site and the day was a huge success with a large number of Knot being caught and colour-flagged.

The aim of catching at Formby Point is to colour mark a sample of Knot as part of a long running study in Norway and Iceland trying to show the differences in migration routes to Greenland and Canada of the Icelandica Knot.  Typically in spring and autumn very few Knot on the West coast are being seen with colour marks.  This increases over winter and drops again in spring.

Colour marking birds in Autumn, along with recording moult, should provide an insight into whether these birds generally migrate via Iceland rather than the more traditionally studied route via Norway.

The results have exceeded all expectations with re-sightings on the Dee Estuary the very next day!  Hilbre also had its share of sightings (with an increase in Knot numbers being seen around the islands this winter) as well showing how the wintering birds of Liverpool Bay move around.  Birds from this cohort have a single BTO metal ring on the right leg, a pale blue colour ring on the left leg with an orange flag above it with an alphanumeric code.

Good Friday 2018 saw the return of the team to Altcar to try and catch a sample of the spring birds using the area. A couple more of the Hilbre regulars joined the team which again included a large team from SCAN and the South West Lancs Ringing Group.

Another successful catch saw not only a large number of Knot flagged (527 this time with a green colour ring below the orange flag) but also a catch of 78 Grey Plover, the biggest catch in the UK for 20 years, and 9 Bar-tailed Godwits. These birds were also colour flagged to help our understanding of their movements and survival.  We also caught several controls including a Polish colour ringed bird (see photo by KMc below).

Incredibly, only two days after these birds were ringed on Easter Sunday, several of the Knot and one Bar-tailed Godwit were sighted by Hilbre Observatory members around Hilbre.  The partial summer plumaged Bar-tailed Godwit roosting on Middle Eye over the high tide. 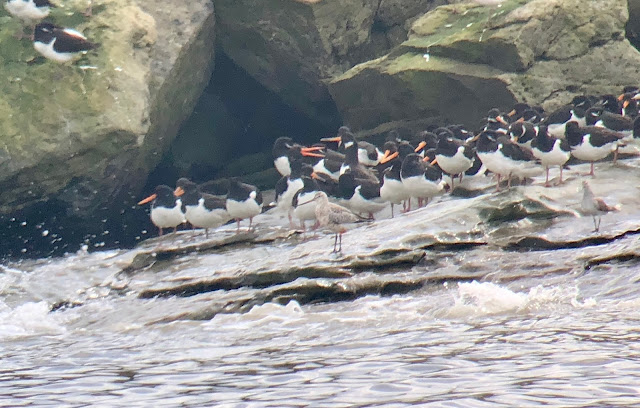 Please keep an eye open for these birds and report any sightings to Jim Wilson at:  jimwils@frisurf.no

All the data is important to help our understanding of where and when these birds migrate from and which routes they use. The Red Knot population is in serious decline and scientists, with the help of ringers, are trying to establish the causes of these declines in the hope that remedial action can be taken to reverse the situation.