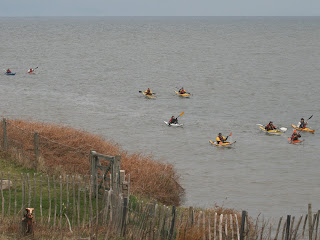 Two Merlins were seen this morning, a male and a female/immature type (below), neither of which was the bird seen on Tuesday as that had missing/growing primaries and these did not. One of the highest tides of the year brought out the Sunday canoeists (right), unfortunately between the Merlins and the canoeists the waders roosting on Middle didn't stand a chance of not being disturbed during the high tide period. 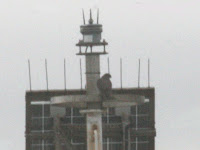 Migration wise a very quiet day, even when a Wheatear was seen briefly on the west side it immediately disappeared and could not be re-found. Single Siskin and Goldfinch were the only passing finches and a Skylark also travelled alone, but there were 2 Goldcrests in 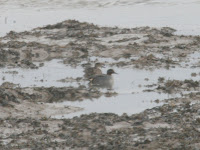 the paddocks, one of which was the bird of 2 days ago. A Woodpigeon arrived very early but did not stay, and a Little Egret was out on the shore away from the islands. After the tide a pair of Teal landed briefly in a rock pool east of Middle (right).
No Little Gulls this morning, just a summer plumaged Red-throated Diver, 14 Great Crested Grebes, 16 Common Scoter and a Razorbill, while the pick of the shorebirds were 2 Sanderling and 2 Grey Plover.
Ringed:- 1 Robin
(DB +ESCA,CJ,NDW,PSW,SRW, CJW) [48] photos CJ
Posted by Colin at 17:42