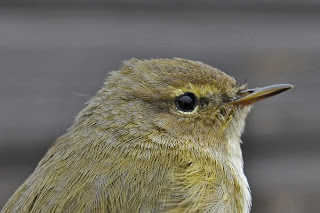 Heavy fog this morning resulted in a good ringing day with many passing birds staying low to the island. Lots of Meadow Pipits moved through, mostly early in the morning, totalling about 600 with 24 Pied Wagtails and a single White also early movers.
The most obvious change from previous days was the arrival of 8 Chiffchaffs in the paddocks (right), a normal prelude at this time to the first Willow 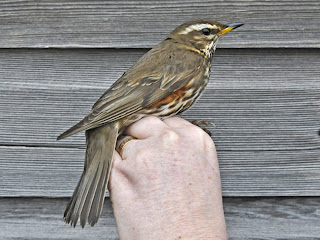 Warblers in a week or so. Two Goldcrests moved off the island early morning, likewise a House Sparrow, and then 2 Tree Sparrows flew through later in the morning. Staying longer was a Magpie although a Collared Dove soon disappeared. 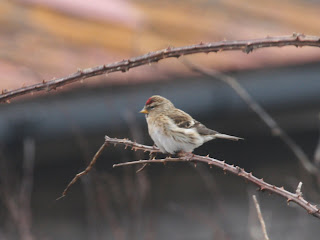 There were 5 Wheatears today (4 before 8.00 am) after a blank day yesterday, but finches were in similar numbers, most species being in single figures including Chaffinch, Goldfinch, Siskin, Greenfinch and Lesser Redpoll (right) (with one Redpoll being ringed today). Skylark and Starling seen were singles only, also a lone Redwing (above) that flew into the obs garden mist net when it was least expected as there not been any thrush movement, although a new Blackbird was later ringed.
Sand Martins came along in ones and twos with 12 logged by mid-day.
The Merlin remains in the area of the ridge south of Middle, despite one of the local crows 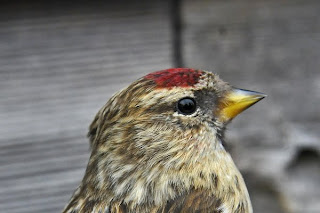 chasing it off its perch this morning. 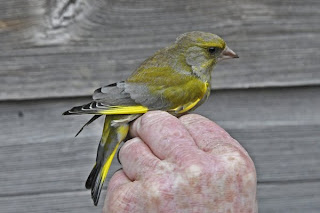