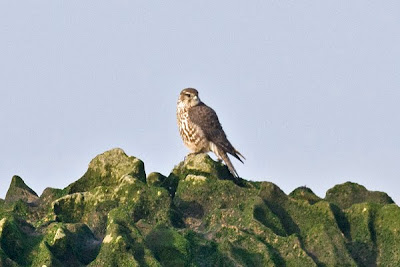 One of the Merlins (right) was found on the ridge south of Middle early this morning, and this proved to be a good omen for the rest of the day. Plenty of Meadow Pipits moving first thing and flocks of Jackdaws across the island including one of 20 birds. An excellent record was of a pair of Goosanders flying south down the west side tide edge, and earlier 2 Drakes and a female Eider 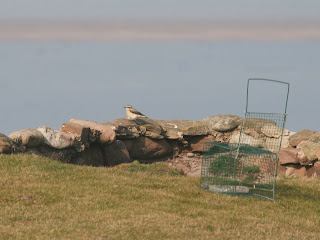 (Eiders have been scarcer than normal recently at Hilbre) also flew south.
The first Swallow seen by members this year was over the obs early on, while during the morning 4 Sand Martins floated through and 3 Wheatears appeared on the west side (left), one of 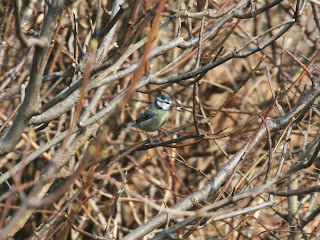 which finally gave itself up in the potter trap.
The sequence of Siskins continued as 7 called overhead, and then a Redpoll calling prompted a sound lure to be played which had an immediate effect bringing a flock of 6 birds down to the obs garden. One was noted to be a typical 'Mealy' 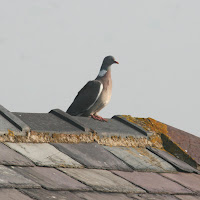 type but unfortunately after sampling the feeders they departed the island. Other seed eaters today included no less than 3 Reed Buntings, a Tree Sparrow, 16 Goldfinches, and 4 Chaffinches. A Blue Tit appeared mid-morning and circuited the 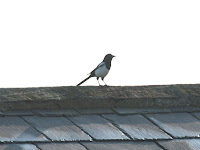 feeders on the island including the obs garden (above right). The warbler family was represented by 6 Goldcrests in the paddock areas.
Three Woodpigeons (above) were present but each chose to keep to themselves, and a Magpie stayed all morning (right), but flocks of 3 then 6 Collared Doves went right through. 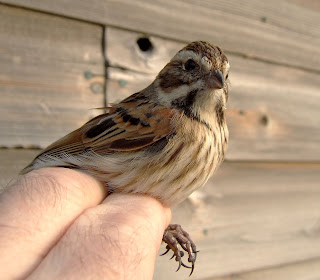 Only 2 Starlings and no Skylarks today but 8 Pied Wagtails and one White Wagtail were logged. 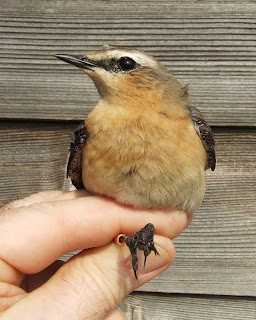