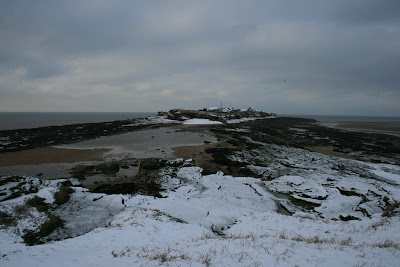 The weather turned on Friday evening and brought a covering of snow to the Wirral peninsula as well as to Hilbre which is unusual. Observers made an afternoon visit on Saturday to enjoy the views of the islands blanketed in snow (view of Hilbre from Middle Eye above, Hilbre Bird Observatory below left, main island looking back from North End below right). 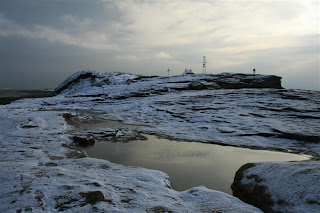 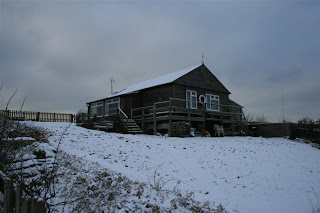 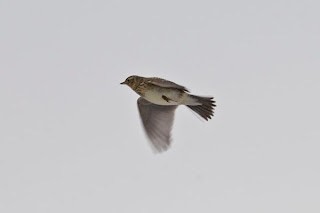 The snow provided evidence of a number of species present on the island including the elusive Rabbit (left). However, the birding wasn't bad either with 5

Redwings seen and heard overhead as well as 70 Skylarks passing over including one flock of 60+ birds (see far right). The blackthorn in the trapping areas was also sprinkled with snow too (see above right).

A single Snipe was flushed from near the frozen pond. At the North End a flock of 52 Scaup (see below centre) was found drifting just off the island and the flock included a single drake Tufted Duck. A single Wigeon (left) drifted close in shore as did a single drake Teal (see right). 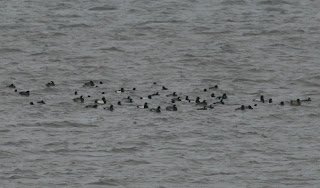 An adult winter Mediterranean Gull flew past the North End and is presumably the same bird that has been seen on about four occasions around the islands recently.

The cold weather movement continued well into the afternoon and included ten Lapwings heading west. Waders were much in evidence around the North End slipway with 4 Purple Sands, plenty of Turnstone (c100), Knot (25), Grey Plover, Redshanks, Oystercatchers and Curlews

(see right) to name but a few.
Passerines on the island included a couple of Rock Pipits, a slight increase in Meadow Pipits was noticed and out of 4 Song Thrushes and 3 Blackbirds a new male Blackbird was trapped and ringed and a female was retrapped as was a Robin.

[PSW, SRW] [712] Photos Skylark, Wigeon and Curlew PSW and remainder SRW
The day ended with blue skies and sun dipping down behind the snow clouds above Wales bathing the island in lovely blue light reflecting off the snow (see below). 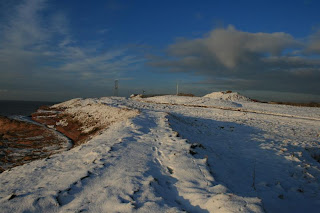 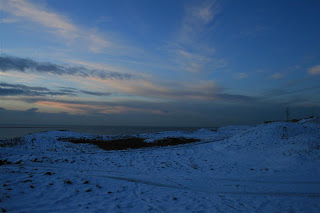