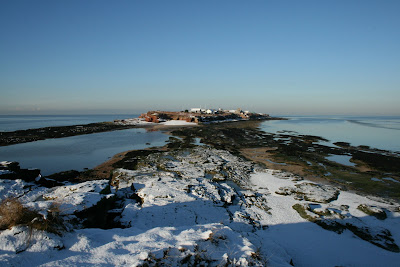 An early morning tide had one observer heading around the frozen tide edge before first light to get to the island. Others followed on the ebbing tide to enjoy an absolutely stunning day (weather-wise - see approach from Middle Eye above) on the islands...a crisp day, still snow on the ground and beautiful blue skies were complimented by some more excellent recording. Apologies for the number of photos but the islands were in sparkling form today.

It is not often that the shore is frozen and even the tide in flat calm conditions had ice floating by (see below and right).

Wader and wildfowl numbers were very impressive, and on a WeBS count day, over and after the tide. The best count was 20,000 Knot but good counts of all the regular species (including Redshank - see right) were made and no doubt encouraged the attendance of a Peregrine.

Shelduck were present on the frozen shore in their hundreds, the Brents were loafing around Middle Eye and the reef. Other geese included several skeins of Pink-feet (122) passing over and a flock of Greylag (20). 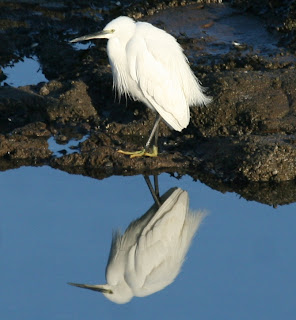 The Scaup flock was still present and had increased to 70 birds during the morning (see above), it still included at least one Tufted Duck (a drake) and nice surprise in the form of three Shovelor (including two drakes) - an unusual record at Hilbre at this time of year. More typical for the time of year were two Goldeneye and a Razorbill on the sea.
Whilst a Little Egret feeding in a tidal pool is also rather typical now; it still looked a little out of place for December (see left)! Good numbers of Wigeon were seen today (see below) including separate flocks of 40 and 65 and a total for the day of 143. 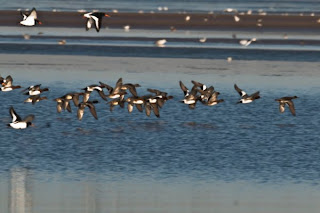 Other cold weather movement was noted including a few flocks of Lapwings (the largest flock being of twenty nine birds), over 150 Skylarks moved over the islands but small groups did stop on the islands briefly, a couple of Redwing were noted and a Snipe was heard and later seen near Middle Eye.
The day ended as it had begun with stunning blue sky but no wind at all with Middle Eye reflecting in the pool between the islands in the evening light (see below right) and the shoreline beginning to freeze even worse than it had this morning (see below left from West Kirby Promenade) tomorrow could be even colder... 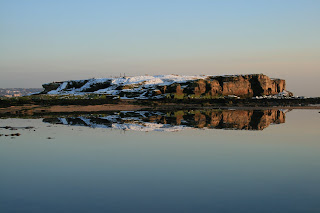 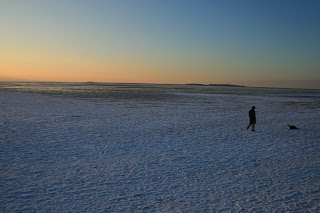