Just outside our recording area - invasions! 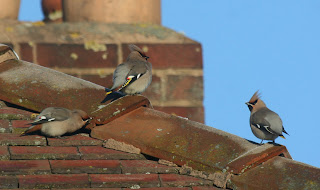 The country has been enjoying a Waxwing invasion since early autumn and Hilbre has had a number of records during this time. On Christmas Eve four Waxwings turned up in one Obs member's garden in nearby West Kirby. The same garden that had one on 14th December 2008 (see blog for that date).

They did not stay long though (three of the four right). 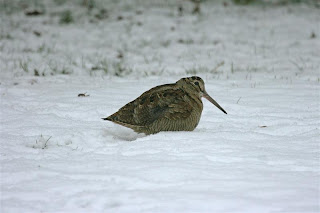 As well as Waxwings (and many other species heading west to avoid the extreme weather on the continent), Woodcocks have been occuring in large numbers across the country and again Hilbre has enjoyed three records between October - December (so far...).

Normally a crepuscular species one was found on the snow covered lawn of two members' garden in nearby Heswall on Christmas Eve and Boxing Day afternoons (see left). Photos by SRW.
Posted by Hilbre Steve at 14:40