Another good winter's morning on the island. Observers arrived in the dark this morning before the tide but were encouraged by the mild moderate SSE breeze. 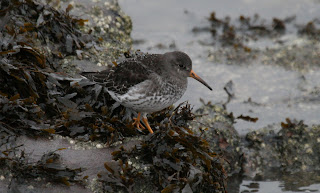 A Woodpigeon was on the Obs roof at first light and kept doing tours of the island during the rest of the morning. Up to six Song Thrushes were present on the island but none were caught. A single Snipe was still present as were at least 142 Pale-bellied Brents and 18 Purple Sandpipers at high tide (see right and below). 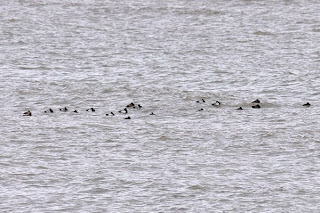 The highlight of the day was a lovely flock of nineteen Greater Scaup (left) that drifted on the tide between Hilbre and Bird Rock (Red Rocks).

A couple of Little Egrets were present as were three Grey Herons. Sea-watching was productive with at last 50 Red-throated Divers seen along with a few Common Scoters, Red-breasted Mergansers and two Bottle-nosed Dolphins were a nice surprise. Up to 38 'Mergs' and 20 Goldeneye are present on nearby West Kirby Marine Lake (which is partly frozen) at the moment. 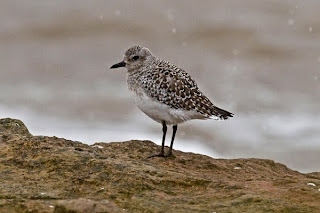 A single Rock Pipit which was ringed in October was still around the North End. Wader numbers were again impressive with large numbers of Knot (at least 10,000) and smaller numbers of Grey Plover than yesterday but these included some confiding birds at the South End of Hilbre itself at high tide (see right). 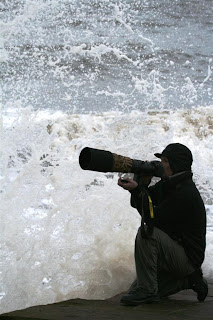 Observers and photographers had to work hard today but had their rewards.

Some even putting themselves (and their new lens) at the mercy of the elements (see left)!

In case Health & Safety are reading this, the wave wasn't as close as it looks!