A Boxing Day visit before the tide by a couple of members resulted in more cold weather movement and some good sightings. 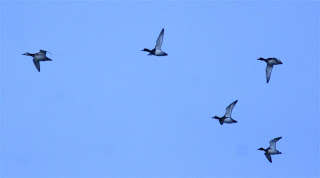 Good movements of Lapwings were recorded with over 80 counted moving west in small groups, flocks of Scaup were seen on the sea and a small group of Tufted Duck (4) and Scaup (female) flew over the North End (see left). Another Scaup appeared below the Obs garden and drifted down the gutter as the tide flooded (see below) and a Goldeneye also flew down the gutter (below left). 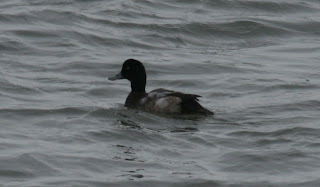 The sheep were fed by Obs regular and Voluntary Coastal Ranger Derek (see below right).

The highlight of the day was another Jack Snipe flushed from the top of the East Side slipway it flew off low south along the East Side so may still be around ...
Waders were again much in evidence with vast flocks of mainly Knot (below right) and Dunlin but also including good numbers of over 400 Bar-tailed Godwit (below left) and the Tanskies also held up to 350 Grey Plover as the tide flooded. 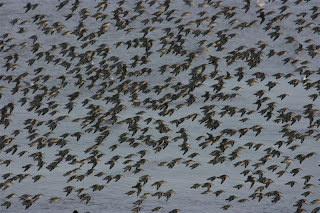 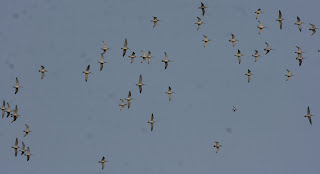