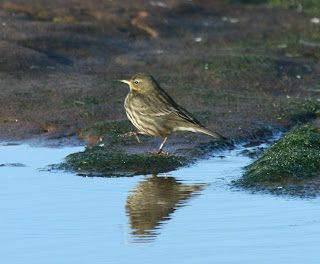 An overcast morning with absolutely no wind produced a quiet morning, to start with. The grey skies coupled with 'flyovers' resulted in apologies for the record-shot photos today. The only passerines on the island were the usual winter residents including two Rock Pipits (one of which was ringed in October - see right).

Things started improving when a Great Northern Diver was spotted flying over the Obs garden to the West before it turned and headed towards the North End (see left). Ironic considering the impressive numbers of Red-throateds at sea yesterday.

The distinctive call of a Snow Bunting was heard over the North End and the bird was spotted flying overhead and off to the South and then West (see below left and right) - unfortunately it could not be relocated anywhere on the island later and had perhaps headed off to the Point of Ayr. 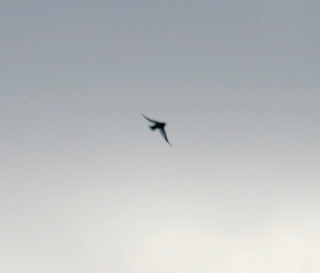 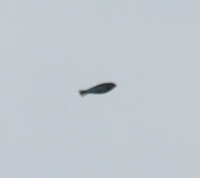 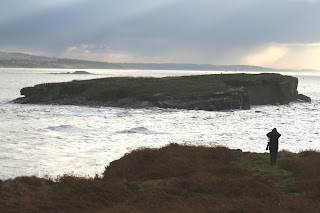 Waders were again in good numbers with at least 12,000 Oystercathers, many of which roosted on Middle Eye which was packed to the top (see left) and many more were trying to pile in during the tide (see below). 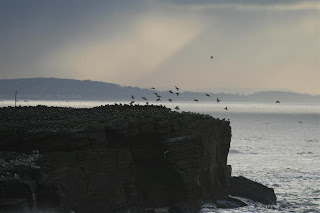 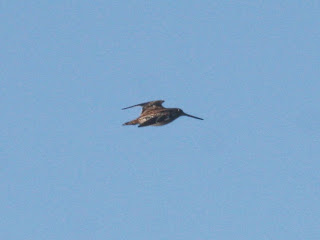 Three Snipe were present on the main island (see left) continuing the recent spate of records coinciding with the cold weather - we are surely due a Jack Snipe or Woodcock soon...
Despite the good records mentioned above, the highlight of the day was an incredible count of Great Crested Grebes with 515 counted (mainly out towards the Burbo Wind Farm) in rafts of up to twenty birds that could be seen for miles on the flat calm sea in bright sunshine as the weather improved during the afternoon.
[CJ, SRW, TGW] Photos CJ (Snipe) and SRW (rest)
Posted by Hilbre Steve at 15:25